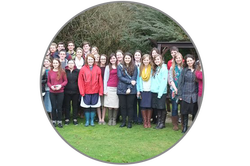 Many of Britain’s youth are unfamiliar with the integral part Christianity has played in the formation this country. From William Wilberforce to Elizabeth Fry, Christians here had a powerful and positive effect in our history. We believe that it is imperative to pass on our Christian heritage to the coming generation.

Through youth camps, weekend outings, historical lectures, Christian Heritage tours, and interactive training days, we hope to give young people the opportunity to know the gospel and the effect it has had on their history

Crown Hall's centrally located position in the Midlands is ideal for practical development of Christian workers. On a weekly basis, people can come and learn, then on the weekends, go and do in churches up and down the country! Putting into practice the training received during the week at various churches will not only solidify the lessons learned in a classroom, but also be a great encouragement to many churches who need extra labourers in various ways.

The Trust currently assists more than forty churches throughout the UK by sending Christian workers to assist in ministries on a regular basis.

At one time, ‘church’ and ‘chapel’ were commonly understood concepts. Sunday Schools flourished and Christianity was viewed as a positive light in the nation.  Sadly, in modern times, this is no longer the norm. Places of Christian worship are being closed and sold at a disturbing pace.

God has graciously allowed our Trust, in the past several years, to re-open six chapels in different cities throughout England. In these buildings that once stood empty, children are now being reached, families hearing the gospel and many growing in the Christian faith.